A Guide to the Best Areas in the Borough of Bexley

The territory of Greater London is currently divided into 33 distinct areas that are called boroughs. Each one of those boroughs has its own character and atmosphere. Even though it is hard to rank the best places to live in London, it is certain that Bexley is one of those that deserve our attention.

A bit about Bexley 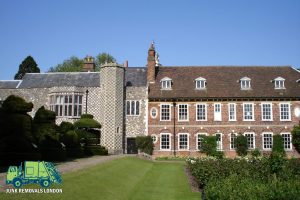 Located in the easternmost parts of the capital, bordering Greenwich to the west and the River Thames to the north, The London Borough of Bexley covers a territory of grand total 60.56 square kilometres and has a population count of 246 100 according to the latest census that was conducted in 2011. Most of modern-day Bexley was developed after the arrival of the railway in the area during the 19th century. Prior to that what we now call Bexley consisted of farmland, clusters of rural settlements and woods. The district of Bexleyheath is where the local council and the rest of the administrative headquarters of the borough are based. Despite the marked suburban character of Bexley today, the area has several pretty nice open green spaces, including:

Caption: Hall Place is one of the most peculiar buildings in Bexley

The last one is the gardens of a magnificent stately home and one of the most peculiar buildings in London today.

If you are looking for a place here to settle down at, we would recommend that you take a look at the district of Thamesmead – not only because of the magnificent junk removal services in Thamesmead SE28, SE2 you can find here. The district is located on the south bank of the Thames. It is suburban in character and still bears signs of former military use. The district is peaceful and comfortable and enjoys great transport links to other parts of the capital.

You will also find excellent rubbish removal services in Longlands DA14, DA15, as well as great living conditions. Longlands is far from being the most famous residential area in London, and that’s precisely why it is so charming. With a population of 10,442, it has some commercial facilities, a restaurant, a post office and a fish and chips shop. It many respects Longlands is your typical English suburb and if you fancy the idea of it, you will fancy Longlands too.

The DA15 postal district contains yet another great place to live in Bexley. With access to top-notch rubbish removal services in Blackfen DA15, the district is largely residential in character. Its name comes from the soil that is to be found here – mostly dark and fertile, which explains why in the past most of Blackfen was covered by farmlands. Most of the houses here were built in the 1930s. Today it is home to some of the finest schools in Bexley, such as the Blackfen School for Girls and Sherwood Park Primary School, which is why Blackfen is a desirable location for families with small children.

For those in need of a peaceful residence

We cannot miss mentioning Bexley Old either. It is home to Hall Place, with its peculiar mix of 16th and 17th-century architecture, as well as other historic buildings. It is the oldest settlement in the area with history to be traced back to the 9th century and many fine examples of 19th-century architecture such as the neo-gothic Tower of the Church of St John the Evangelist, which dominates the landscape in the vicinity. Insured junk removal services in Bexley Old DA5 are also easy to come by. Other important amenities to be found here include the Old Dartfordians’ War Memorial clubhouse, Bexley Cricket Club and others.

The last district we would like to bring your attention to is, of course, Barnes Cray. Celebrated as one of the most comfortable places to live in Bexley, this district has to offer everything to you: great housing at reasonable prices, schools, transport links, fine junk removal services in Barnes Cray DA1 and many more. The River Cray runs through the area, which is located exactly on the border of Greater London. Its location will offer you the peace and quiet that you have been looking for a long time, away from the hassle and stress of the big city.