Cities Which are Most Obsessed with Recycling

Resources in urban environments are always more limited as opposed to those in rural ones. That is because cities tend to be densely populated, heavily polluted and overbuilt compared to smaller types of settlements. As a result, every large metropolitan area needs to put some extra effort to ensure that the waste produced on its territory is recycled. Currently, the countries that are dominating the recycling scene are:

These nations recycle and reuse half or more than half of the waste their populations produce. Unfortunately, the UK is far from reaching this level of environmental responsibility. The same goes for London too. The Big Smoke is nowhere to be seen on the list of cities that recycle the most in the world. One way to change that is if you rely on organised junk removal services in Upper Norwood SE19 or any other London area. So, which are the world’s top cities when it comes to recycling?

With waste recycling rates of 80%, San Fran is the world’s recycling champion. The city has some of the best recycling initiatives and programs on an international level and it has big plans for the future – to become a zero-waste city. About 45% of the local population relies on green transport options which further pushes the Golden Gate City up on the Green City Index.

This is the only city from South America which you will see on this list. Curitiba may not be Brazil’s largest, most populous or most famous city but it is the most eco-friendly one. However, it has been actively fighting pollution in all its forms for more than half a century now. It recycles 70% of all its waste and it is officially the greenest city on the planet. It is estimated that the green space on its territory covers about 52 square meters… per capita!

This city-state recycles 60% of its waste. Unlike other Asian cities which rank low on the Green City Index, Singapore is a true leader. The Lion City seems to have solved one problem of global proportions – unrecyclable waste. Plastic rubbish in Singapore is incinerated and it is then sent to a man-made island. Although that is a temporary solution to this problem, it seems to be working for now because the streets in this city are among the cleanest in the region.

Like Singapore, Vancouver’s recycling rates are also calculated at 60%. This number was not particularly impressive prior to 2011 but in the early days of this decade, the city adopted a series of laws and started several anti-pollution initiatives that made this impressive result possible. 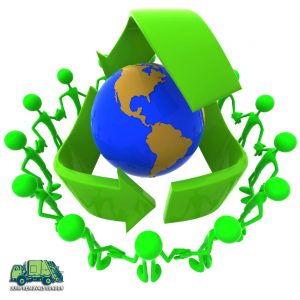 Even though four of the top 5 countries that recycle the most in the world are set in Europe, Denmark’s Copenhagen is the only city on the Old Continent that has managed to make its way to this list. About 57% of its waste is recycled and less than 2% of it its non-recyclable rubbish ends up at landfills.

Waste is an issue all over the world. If you want to be part of the solution and not of the problem, let professionals handle your rubbish. Use secure garage junk removal services in London to ensure that your waste is adequately collected and disposed of.